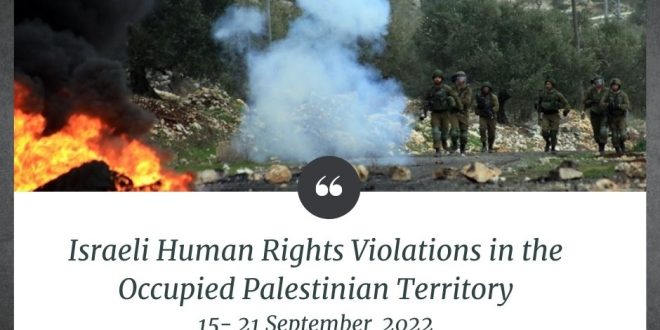 A Palestinian child was killed and 9 other civilians, including 2 children, were injured, while dozens of others suffocated in Israeli Occupation Forces (IOF) attacks in the West Bank, including occupied East Jerusalem. Details are as follows:

On 15 September 2022, ‘Odai Salah (17) was killed and 3 other Palestinians, including a child, were wounded by IOF fire during the latter’s incursion into Kafr Dan village, west of Jenin in the West Bank. Before their withdrawal, IOF arrested 3 Palestinians. (Details available in this press release).

Meanwhile, those injured were victims of excessive use of force that accompanied IOF incursions into cities and villages and suppression of peaceful protests organized by Palestinian civilians, and they were as follows:

On 15 September 2022, 5 students suffocated due to teargas inhalation after IOF fired stun grenades and teargas canisters at the yard of ‘Isawiya High School for Boys during IOF’s incursion into Isawiya village in occupied East Jerusalem.

On 16 September 2022m 4 Palestinians, including a child, were shot with rubber-coated bullets in clashes Following IOF’s suppression of Kafr Qaddoum weekly protest in northern Qalqilya.

On 18 September 2022, a Palestinian was wounded by IOF’s fire in clashes following the latter’s incursion into Husan village, west of Bethlehem.

On 20 September 2022, a Palestinian was wounded in his foot by IOF fire in clashes following IOF’s suppression of a funeral near Bypass Road 60 in Beit Ummar village in Hebron.

IOF demolished a house and a facility, handed notices to cease construction works in 4 other facilities, and dismantled and confiscated 7 tents. Details are as follows:

On 15 September 2022, IOF handed notices to cease construction works in 4 industrial facilities in Qarawat Bani Hassan village, west of Salfit, under the pretext of unlicensed construction.

On 19 September 2022, IOF demolished a house and a livestock barrack in ad-Duyuk al-Foqa village, west of Jericho, under the pretext of unlicensed construction in Area C.

On the same day, IOF dismantled and confiscated 7 tents established for an entertainment project in Al-Auja village, northeast of Jericho.

” Since the beginning of 2022, Israeli occupation forces made 113 families homeless, a total of 670 persons, including 130 women and 310 children. This was the outcome of IOF demolition of 119 houses and 41 residential tents. IOF also demolished 92 other civilian economic objects, leveled vacant areas of land and delivered dozens of notices of demolition, cease-construction, and evacuation.

On 15 September 2022, under IOF’s protection, the Extremist Israeli Members of Knesset (MKs), Rabbi Yehuda Glick, moved into Bab Al-Rahma Islamic cemetery located next to al-Aqsa Mosque from the eastern direction. He blew the trumpet and raised the Israeli flag.

On 17 September 2022, an armed Israeli settler raided ‘Ein al-Qasis area in al-Khader village, west of Bethlehem, detained a Palestinian farmer at gunpoint and later released him.

On 20 September 2022, Israeli settlers assaulted al-Khawajat Market’s merchants in occupied East Jerusalem’s Old City and heavily teargassed the market. As a result, tens of merchants and passersby suffocated due to teargas inhalation.

” Since the beginning of the year, settlers conducted at least 183 attacks. In two of the attacks, 2 Palestinians were killed.

IOF carried out 187 incursions into the West Bank, including occupied East Jerusalem. Those incursions included raids and searches of civilian houses and facilities and establishment of checkpoints. During those incursions, 98 Palestinians were arrested, including 10 children. In the Gaza Strip, on 17 September 2022, IOF arrested a Palestinian who tried to infiltrate via the border fence adjacent to the northern Gaza Strip.

Israeli collective punishment and closure policy and restrictions on freedom of movement:

Meanwhile, IOF maintain its illegal and inhuman 15-year closure on the Gaza Strip. Details available in PCHR’s monthly-update in the Gaza crossings.

On 20 September 2022, a patient namely Tayseer Daoud Yousuf Al-Sayegh (67), from Gaza City, died when the Israeli authorities denied his travel for treatment at Al-Muttala’ Hospital in occupied Jerusalem. Accordingly, since the beginning of this year, the number of patients denied travel for treatment abroad has risen to 6, including 3 children. (Details available in this press release).

On 18 September 2022, IOF re-opened al-Jalama and Salem crossings, while they put Kafr Dan villagers’ permits on hold for, including work permits. It is worth noting that on 14 September 2022, IOF decided closure of the two crossings mentioned above and imposition of restrictions as part of the collective punishment policy following a shooting attack near al-Jalamah crossing in Jenin. (Details available in this press release.)

” So far in 2022, IOF established at least 3203 temporary military checkpoints and arrested 151 Palestinians at those checkpoints

Previous Sixth in This Year: Cancer Patient Dies after Israel Denies His Travel for Treatment Abroad
Next Christian Evangelists carry out destructive activities for the benefit of settlers 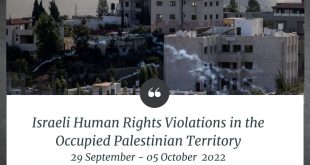 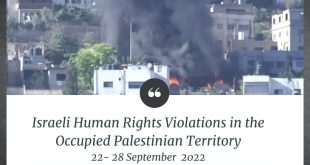 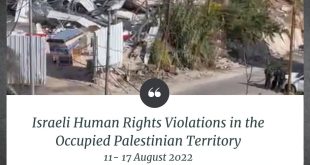