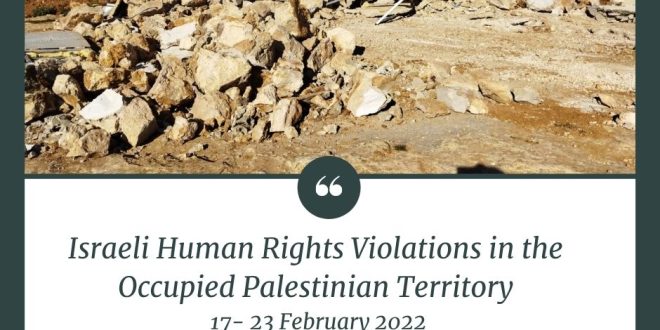 This week, IOF attacks continued in Sheikh Jarrah neighborhood in occupied east Jerusalem, including imposing closure on the neighborhood, suppressing the protestors with sound bombs and teargas canisters, beating them with batons, and terrorizing them with mounted police officers, storming houses, and damaging tables and chairs placed by the villagers and solidarity activists in front of the Israeli Knesset Member and extremist Itamar Ben Gvir’ office. As a result, a Palestinian sustained fractures in his hand and two sisters and two activists sustained bruises after being beaten by IOF. Also, Mohammed Morshed al-‘Ajlouni (25), a person with disabilities, was beaten by IOF, who tried to arrest him and handcuff him, causing him to panic.

So far in 2022, IOF attacks killed 8 Palestinians, including 2 children, and wounded 87 others, including 18 children, 7 journalists and 2 medical personnel, all in the West Bank.

This week, IOF demolished 10 civilian facilities, including a house, 4 small dwellings and a tent, displacing 6 families of 47 individuals, including 28 children and 4 women in the West Bank:

Since the beginning of 2022, Israeli occupation forces made 31 families homeless, a total of 198 persons, including 35 women and 93 children. This was the outcome of IOF demolition of 38 houses and 4 residential tents. IOF also demolished 19 other civilian objects, and delivered 22 notices of demolition, cease-construction, and evacuation.

IOF carried out 187 incursions into the West Bank, including occupied East Jerusalem. Those incursions included raids of civilian houses and shootings, enticing fear among civilians, and attacking many of them. During this week’s incursions, 116 Palestinians were arrested, including 14 children and a woman. Also, on 21 February, IOF conducted a limited incursion into eastern Rafah, south of the Gaza Strip.

So far in 2022, IOF conducted 1,024 incursions into the West Bank, including occupied East Jerusalem, during which 638 Palestinians were arrested, including 63 children and 7 women.

This week, 11 settler-attacks were reported in the West Bank, resulting in the injury of a driver, and damaging 2 vehicles.

So far this year, settlers carried out 42 attacks on Palestinians and their properties in the West Bank.

Israeli occupation maintains its illegal and inhuman 15-year closure on the Gaza Strip. Details available in PCHR’s monthly update on the Gaza crossings.

In the West Bank, including occupied East Jerusalem, IOF continues to impose restrictions on the freedom of movement. On top of its 108 permanent checkpoints, IOF established 97 temporary military checkpoints this week and arrested a Palestinian at those checkpoints. The majority of the checkpoints were in Hebron (37) followed by Bethlehem (16) and Ramallah (15).

So far in 2022, IOF established 467 temporary military checkpoints this week and arrested 27 Palestinians at those checkpoints

Previous Palestinian ambassador to Denmark: apartheid is a reality and the Israeli smokescreen is fading
Next Newspapers Review: The Ukraine conflict and its repercussions highlight of the Palestinian dailies 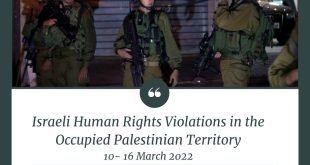