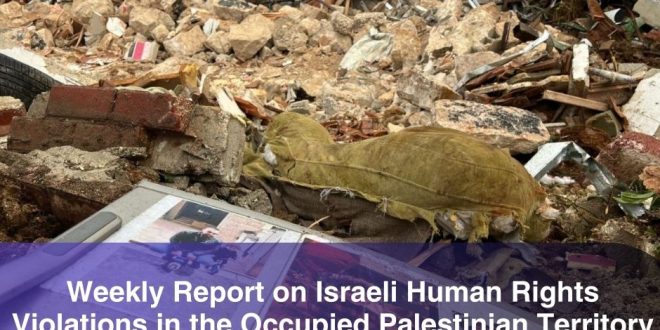 Israeli occupation forces (IOF) continued to commit crimes and multi-layered violations against Palestinian civilians and their properties in the Occupied Palestinian Territory (OPT).

IOF shooting and violation of right to life and bodily integrity:

On 17 January 2022, 69-year-old Suliman Eid Al-Hathaleen, from Khirbet Umm al-Khair in eastern Yatta, died of his wounds after an Israeli police truck ran over. Al-Hathaleen was a prominent Palestinian figure and activist against the Israeli settlement and forcible transfer policies practiced against Palestinians. On the day of the incident, the Israeli truck fled the scene leaving Al-Hathaleen without any aid until a Palestinian ambulance was able to transport him to a local hospital in Hebron, where he succumbed to his injuries.

IOF carried out 147 incursions into the West Bank, including occupied East Jerusalem. Those incursions included raids of civilian houses and shootings, enticing fear and havoc, destroying their property, and attacking many of them. During this week’s incursions, 102 Palestinians were arrested, including 10 children and a woman. Among the arrestees were two minor students who were detained after IOF raided their school in Ramallah and assaulted the teaching staff.

In the Gaza Strip, IOF conducted 2 limited incursions into its southern and northern areas.

PCHR documented settler-attacks in Burqa and Sebastia in Nablus.

Settlement Expansion and settler violence in the West Bank, including occupied East Jerusalem

Settlers’ Attacks against Palestinian Civilians and their Property:

Closure policy and restrictions on freedom of movement of persons and goods:

Here follows PCHR documentation of restrictions on the freedom of movement and IOF-established temporary checkpoints across the West Bank this week:

On Friday, 14 January 2022, IOF established a checkpoint at the entrance to Burqin village.